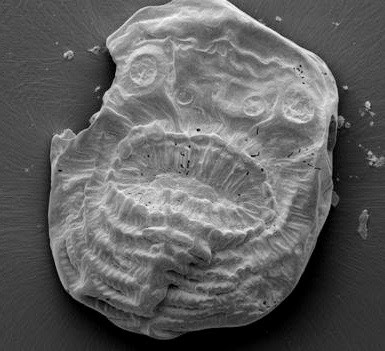 Those who read my blog know I often photograph imaginal beings that dwell in that magical space between me and the collective consciousness of the world.

Thus, you can imagine my delight when science jumped into the act, photographing just such a "being," a transgendered individual, both male and female, they call Saccorhytus.

Here's what they say about her: "Saccorhytus was about a millimetre in size, and is thought to have lived between grains of sand on the sea bed. Saccorhytus was also covered with a thin, relatively flexible skin and muscles. It probably moved around by wriggling."
quote from http://www.bbc.com/news/science-environment-38800987
Posted by psychos capes at 10:42 AM No comments:

I had a dream last night: A Parable for Our Times

A newer version of this piece with added postscript
was publishedn1/28/17 in the Concord Monitor:
http://www.concordmonitor.com/A-parable-of-our-times-7647198

I had a dream last night.  It was about a homeless man living on the streets, beaten down for so long he had lost all hope, until one day his only friend died, ravaged by abuse and neglect from a faceless oppressor.

Roused from his zombie-like existence by her death, he found himself carving a likeness of her killer on the roots of an overturned tree in the nearby park. It was physically hard work but even more so emotionally, trying to recover such a fundamental repressed memory from a lifetime of trauma.

People passing by stopped to stare but became energized by his passion and began donating gouges and carving knives to promote his cause. Over time, the sculpture started to take shape in the form of an avenging god.

The homeless man called it Moloch in reference to Allen Ginsberg’s poem “Howl,” which he had read in a tattered book he had rescued from under some rotten food in a dumpster.

In fact, he had memorized the opening lines: “I saw the best minds of my generation destroyed by madness, starving hysterical naked, dragging themselves through the negro streets at dawn…”

The truth of what the poet was saying resonated in every fiber of the homeless man’s body and soul: his heart went out to the unemployed, the mentally ill, the veterans, all the regular folks in our country who have been discarded for being just another unneeded item, a commodity that has outlived its usefulness.

The homeless man was correct: Moloch is Ginsberg’s metaphor for global capitalism, the avenging god of the marketplace, the relentless overseer who runs our whole nation like one big, for-profit business; Moloch, whose money and power makes him the hidden ruler, even over our government, keeping both democrats and republicans meekly in line.

Each day more people came streaming to the park to see the homeless man’s creation, which was slowly but surely, revealing the secret identity of this terrifying apparition who had lurked in the shadows of their nightmares all these years.

The sculpture became a sensation. Some pundits pointed out the statue’s resemblance to the new orange-haired president. More and more people streamed to the park feeling empowered that they could finally identify their real oppressor.

Rising up as one, the people began to protest, refusing to remain passive pawns in a system that rewards the top 1% at the expense of the 99% of the rest of us; in a system where eight men (six of whom are Americans) own the same amount of wealth as one-half the world’s population.

Looking back years later, historians agree this was the turning point when the people rose up against this gross inequality and demanded power be returned to them, restoring democracy in America.

Posted by psychos capes at 11:21 AM No comments:

After Trump, the Raven Quoth Nevermore

Posted by psychos capes at 12:52 AM No comments:

Under the Oakland Bay Bridge: 2 views

Posted by psychos capes at 1:58 AM No comments:


Quote from Guernica on evolution of mental health practices:

"Even so, not unlike the shackles it replaced, this invention too would gradually fall out of fashion—as would, in turn, forced lobotomies, and sensory deprivation, and fever therapy, and induced insulin comas, and then the entire creaking, crumbling institutional edifice altogether, until finally, thankfully, we arrived at the neurocentric, non-invasive, psychopharmacological moment in which we find ourselves today.

"It’s a moment characterized, among other things, by the increasing offshoring of clinical drug trials; by the transformation of jails and homeless shelters into warehouses for the mentally ill; and by the sovereign omnipresence of the DSM. It’s a moment that has expunged, in rhetoric if not in practice, any trace of the older prerogatives of imposition and control from its therapeutic lexicon.

"What’s left? Those familiar and taken for granted terms—community care, best practices, clients and consumers instead of patients, and on and on—that now comprise such an established part of mental health care in the global North."*

Posted by psychos capes at 1:30 PM No comments:

This sculpture blows me away. It feels so ascendent, I feel myself becoming untethered as if I am too, along with the pieces in the sculpture, floating up, free at last. it's like the laws of gravity have been suspended.

I love Cornelia Parker's sculpture in and of itself. But my infatuation deepens, becomes more inspirational and empowering after I learn its history.
Cornelia Parket constructed this sculpture from the charred remains of a Southern Baptist church with a predominantly African American congregation, which was destroyed by arsonists. After Parker learned of the arson, she received permission to use the timbers of the burned church to make this piece.

In the title, Parker (who was raised Catholic) uses the word "mass" as a reference to both the elemental substance of the universe and the sacramental ritual at the center of the Christian faith. In this way, the realms of science and religion are brought together to emphasize the power of creativity over violence and destruction.

This is a great piece of art: Floating ethereally in the air, it becomes, for me, a sacred object of quiet meditation and reflection.

The take-home lesson for me: If we stand true to our values we can ascend to freedom, transcending the petty and the profane.


Posted by psychos capes at 2:37 PM No comments: