Dreaming of the return of the light – and garden catalogs

I took this photograph today, a close-up view of fruit stacked on a market stand, creating a bold pattern of repeated forms and colors, a delicious treat, especially on this unusually drab and dark, overcast and rainy day stuck ignominiously between the shortest day of the year and the beginning of the New Year.

Because this produce looks so lush and succulent – plus guaranteed to be 100% organic – you yearn to just grab a piece and take a big bite, but you can't. The fruit displayed on this stand was painted by Gustave Caillebotte 130 years ago and it was his painted images I photographed today at the MFA in Boston.

Gustave's vibrant painting instantly transported me back to sun-filled days in our own lush garden last summer. And triggered happy memories of visiting similarly spectacular food stalls at the Common Ground Fair in Maine. (See blog entry from 4/4/09).

Posted by psychos capes at 10:57 PM No comments:

The Times They A-Changin'

Is worth savin'
Then you better start swimmin'
Or you'll sink like a stone
For the times they are a-changin.


Come writers and critics
Who prophesize with your pen 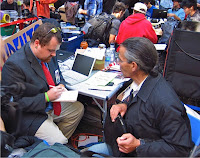 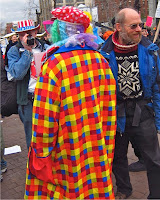 Will later to win
For the times they are a changin'.


Come senators, congressman
Pleas heed the call
Don't block up the hall
For he that gets hurt
Will be he who has stalled
There's a battle outside
And it is ragin' 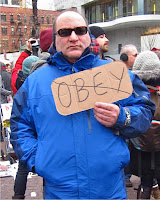 It'll soon shake your windows
And ratte your walls
For the times they are a-changin'. 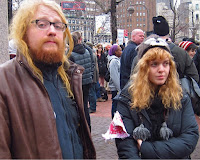 Are beyond your command
Your old road is
Rapidly agin'
Please get out of the new one
If you can't lend your hand
For the times they are a-changin'.


The line it is drawn 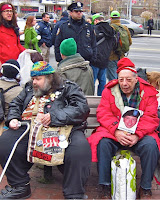 * The lyrics obviously from Bob Dylan's For the times they are a-changin'.
* The photographs are all by me, except for the last one, which is of me talking to new friend, Dave.

Posted by psychos capes at 11:28 PM No comments:

Return of the light after Winter Solstice

Darkness can't drive out darkness;
only light can do that.
Martin Luther King

To all my readers on this, the Winter Solstice:
May you be happy
May you be healthy
May you live with ease
Posted by psychos capes at 7:26 AM No comments:

We are all one at Winter Solstice

“The first peace, which is the most important, is that which comes within the souls of people when they realize their relationship, their oneness with the universe and all its powers, and when they realize that at the center of the universe dwells the Great Spirit, and that this center is really everywhere, it is within each of us.” – Black Elk
Posted by psychos capes at 10:26 AM No comments:

They tell you we are dreamers

THEY TELL YOU WE ARE DREAMERS.
The true dreamers are those
who think things can go on
indefinitely the way they are. 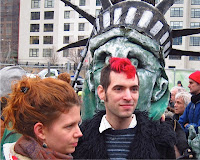 We are not dreamers. 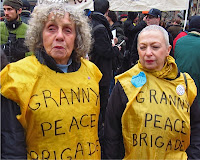 We are awakening from a dream
which is turning into a nightmare. 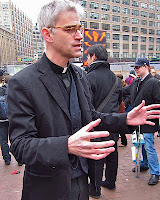 We are not destroying anything. 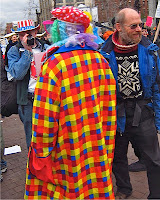 We are only witnessing how the system is destroying itself.*

*Quotes above from a speech given by Slavoj Zizek at Liberty Square, NYC in October 2011
Posted by psychos capes at 10:19 PM No comments:

Mother Earth undressing us, putting us to bed 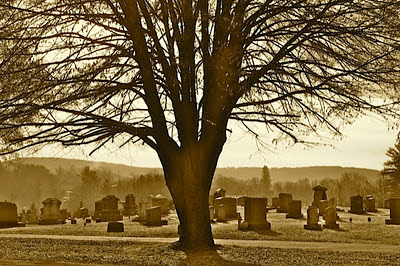 Who will save us?

The rich are getting richer and the poor are getting poorer at a staggering rate.  Once upon a time, the United States had the largest and most prosperous middle class in the history of the world, but now that is changing at a blinding pace.

22 Statistics That Prove That The Middle Class Is Being Systematically Wiped Out Of Existence In America*
#1) According to a poll taken in 2009, 61 percent of Americans "always or usually" live paycheck to paycheck, which was up from 49 percent in 2008 and 43 percent in 2007.

#4) According to that same poll, 36 percent of Americans say that they don't contribute anything to retirement savings.

#6) According to one new survey, 24% of American workers say that they have postponed their planned retirement age in the past year.

#7) Over 1.4 million Americans filed for personal bankruptcy in 2009, which represented a 32 percent increase over 2008.
#8) Only the top 5 percent of U.S. households have earned enough additional income to match the rise in housing costs since 1975.

#9) For the first time in U.S. history, banks own a greater share of residential housing net worth in the United States than all individual Americans put together.

#12) The bottom 40 percent of income earners in the United States now collectively own less than 1 percent of the nation’s wealth.

#14) In the United States, the average federal worker now earns about twice as much as the average worker in the private sector.

#15) An analysis of income tax data by the Congressional Budget Office found that the top 1% of U.S. households own nearly twice as much of America's corporate wealth as they did just 15 years ago.

#16) In America today, the average time needed to find a job has risen to a record 35.2 weeks.
#17) More than 40% of Americans who actually are employed are now working in service jobs, which are often very low paying.

#20) Despite the financial crisis, the number of millionaires in the United States rose a whopping 16 percent to 7.8 million in 2009.

#21) According to one new study, approximately 21 percent of all children in the United States are living below the poverty line in 2010 - the highest rate in 20 years.

*The above copied from the website, The American Dream: http://endoftheamericandream.com/archives/22-statistics-that-prove-that-the-middle-class-is-being-systematically-wiped-out-of-existence-in-america
Posted by psychos capes at 9:46 AM No comments:

Where is the millionaire
Who squanderd the bright spring?
Whose lies played in the summer evening sky
Like cheap guitars?
Who spend the golden fortunes of the fall
And died as bare as a tree?

–From Thomas Merton's poem: Dirge for the Proud World–
Posted by psychos capes at 8:26 PM No comments:

Mind is a luminous quality of the earth itself

I'm aware it’s an affront to everything we stand for in our hyper-cognitive, ultra-individualistic society, but what if our precious mind is not unique to us and – even more counter-intuitively –  does not reside inside the squishy gray matter of our fleshy, three-pound brain? What if, instead, what we call mind is not inside our head but a luminous quality of the earth itself . This sentiment is beautifully expressed by David Abram in his latest book, Becoming Animal: An Earthly Cosmology

“As soon as we breathe out, letting mind flow back into the field that surrounds us, we feel a new looseness and freedom. The other animals, the plants, the cliffs, and the tides are now participant in the unfolding of events, and so it no longer falls upon us, alone, to make things happen as we choose.

Since we are not the sole bearers of consciousness, we are no longer on top of things, with the crippling responsibility that that entails. We’re now accomplices in a vast and steadily unfolding mystery, and our actions have resonance only to the extent that they are awake to the other agencies around us, attuned and responsive to the upwelling creativity in the land itself.” (pages 131-132)

Posted by psychos capes at 8:39 AM No comments:

"The significance of this latest public protest movement, erupting all over the country, may eventually rival the impact of the civil rights movement of the 1960s, yet when comparing the two movements, there is one glaring difference: priests, pastors and clergy of every stripe are rarely in the forefront of Occupy protests.

"Instead, secular young people are doing the very work that Jesus from Nazareth would urge us to do. Just as Jesus condemned the injustices of his own day – and overturned the money-changing tables at the Temple – the Occupy protesters are challenging how Wall Street bankers and today’s rich and powerful are harming the masses of people.

"This week, religious people have felt proud of giving turkeys to the poor, but they should be joining the protests against the haughty rich. I maintain that Jesus would be a part of the actions in Portland, Denver, New York and many other cities. For Christians, the crucial issue should be “what would Jesus do”?

Above quotes from Would Jesus Join the Occupy Protests by Rev. Howard Bess, published 11/26/11 by Consortiumnews.com

Posted by psychos capes at 8:56 PM No comments:

The Times They Are A Changing

It used to be bone-chilling cold by the end of November.  In my younger days, I can remember skating on Jenness Pond on Thanksgiving Day. But those days are gone.  This last November, unbelievably, we had 8 days with temperatures topping 60 degrees.

What does this say about global warming?

Bill McKibben once wrote: "To declare, as some editorialists have done, that the warming has not yet appeared and therefore the theory is wrong is like arguing that a woman hasn't yet given birth and therefore isn't pregnant."*

Obviously these dandelions aren’t listening to the critics as they shamelessly birth new babies along the edge of the river flowing through Laconia under the weak December sun.

*  quote from The End of Nature
Posted by psychos capes at 11:18 PM No comments: